Many Flyers mark NYPOWER as the Launch they save that special flight for whether it be their Certification flight or that crazy kit they bought on a Black Friday Special. Share your Story, giving us as Many Detail’s as you Can! 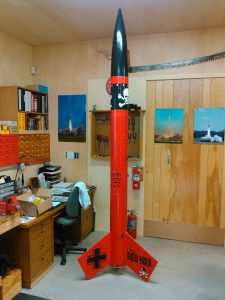 First flown in Geneseo at NYPOWER 13 in 2008, this flight was the featured article in Extreme Rocketry that year. At NYPOWER RedMax will fly on an Aerotech Mohave Green to 4500″ or so. Deployment will be handled by a pair a PerfectFlight Altimeters. 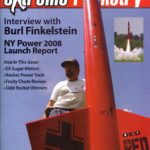 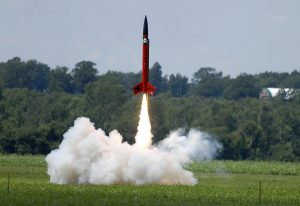 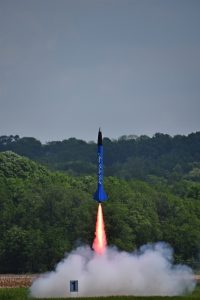 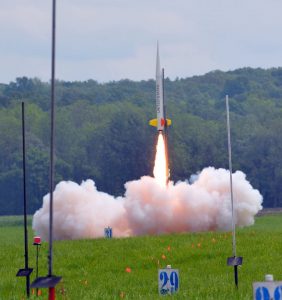 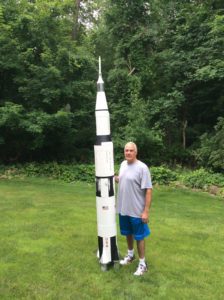 Neil’s Mighty Saturn V is a 10″ Polecat Aerospace kit, made from fiberglass rapped phenolic tube. Neil plans to fly his Saturn V on an Aerotech M1297 to approx 3,000″. Deployment will be handled by a pair of Perfect Flight altimeters.

Neil is the builder and flyer of some really cool and Really LARGE rockets. Check out Neils rocketry website http://neilbrownshighpoweredrocketry.com/ 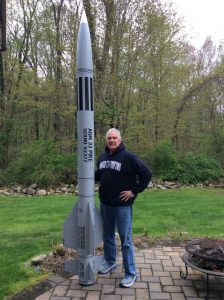 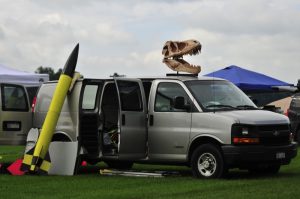 Neil is not only a BIG Rocket guy he is also a HUGE Dinosaur guy, you wont miss his van. Check out his Dinosaur business on the web http://dinosaursrockprograms.com/ or on Facebook https://www.facebook.com/dinosaursrockevents/ 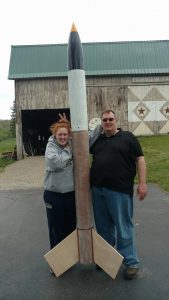 Percy is a scratch built RedMax cloan of sorts. Built from the corpse of other rockets and some parts I Stole from Dan Michael’s garage when he wasn’t looking. 7.5 inch glass covered LOC tube, 1/2 baltic birch fins and an ugly ogive nosecone that came cheep from performance hobbies. A 75mm motor mount will hold a M1500 WhiteLighting cloan propellant. A pair of Perfect Flight altimeters should make for a soft landing. 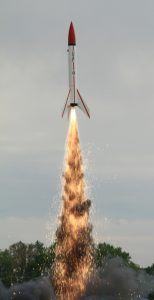 8x Upscale Estes Alpha – Flew Great on an L1040 last year at NSL. I think I’ll stick another sparky in it this year. 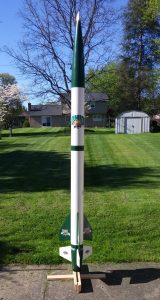 A Rocketry Warehouse Terminator named “Rufus” that was my L3 Rocket.

It is themed after my alma mater, Ohio University. Altimeters are Adept 22 and Adept DDC22. It will have an onboard camera and a beeline tracker. Hoping to fly it on a CTI L3200 so we can hear it whistle. 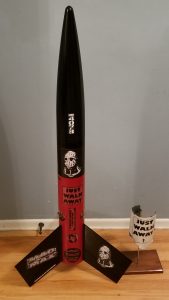 An AMW ProX Fiberglass Max that is themed after the 1983 “Road Warrior” movie, starring Mel Gibson. It has an internal onboard camera. a Raven 3 altimeter, and a Beeline tracker. Don’t know what I’m going to fly it on … maybe a J360 or K454 skidmark. Seems like sparks and flames are appropriate for this post apocalyptic beast. I had built one with this theme before, but it died in a true Mad Max form … A CATO blew it into tiny pieces. THe new one is pictured by the only remains I have of the old one 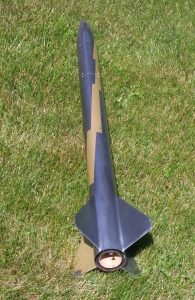 At NSL last year this rocket won the LOC Caliber Challenge. It reached 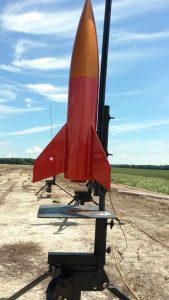 Bill Clune’s Uncle Al’s GIZMO
An Original Gizmo, from the estate of Al Sterner. This kit was originally purchased at LDRS23 here in Geneseo in 2004. A few years ago after a near fatal flight, where it was recovered Literally in kit form, Gizmo has been rebuilt using modern techniques, Dennis Jurus put a stunning House of Colors paint job on it. At NYPOWER Gizmo will fly J400 Fast. A Jolly Logic chute release will hopefully make for a short walk… 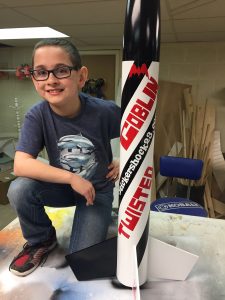 This is my scratch built Goblin. Going for my L1 during NYPOWER. My grandson and I had a great time building this one. AT I180W will be taking it up. 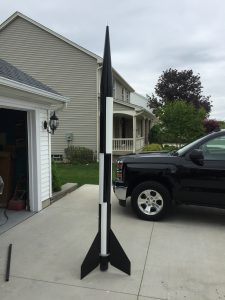 Bill Clune’s Not a Threaded Rod

This is My L3 rocket finally flown at LDRS-36. “NaTR” is an AMW 6″ BlackBrandtII kit. Made from filament wound fiberglass from the bottom of the tailcone to the top of the nose cone, well it has an aluminum tip. At NYPOWER it will fly again on an M1900 Whitelighting cloan to 11,000″! On board electronics include a Marsa54 and a first generation “MARS” altimeter. 12″ rocketman chute makes sure everything lands softly…. 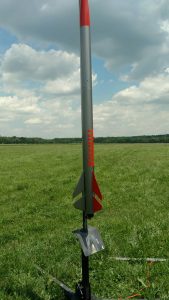 Mischief is an original Wildman Darkstar purchased rite off Tim’s trailer years ago in Maryland, it featured a mis-shaped nosecone and poorly cut fins, LOL
After getting its parts straightened and some tuning Mischief has many flights on it. At NYPOWER it will fly on an K500 White to approximately 4500 feet. An original MARS alitmeter and a perfect flight will release the chute at the appropriate times! 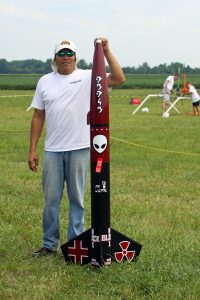 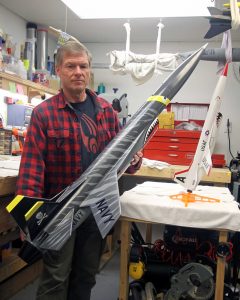 The first serious rocket I’ve built since getting L2 last year, and the first for which I have to keep the waiver in mind. Don’t have any 54mm casings yet, but I do have a 38/1200 Loki K1127 Blue ready for it. Once known as a 2.6in Blue Iguana, but what kind of name is that?